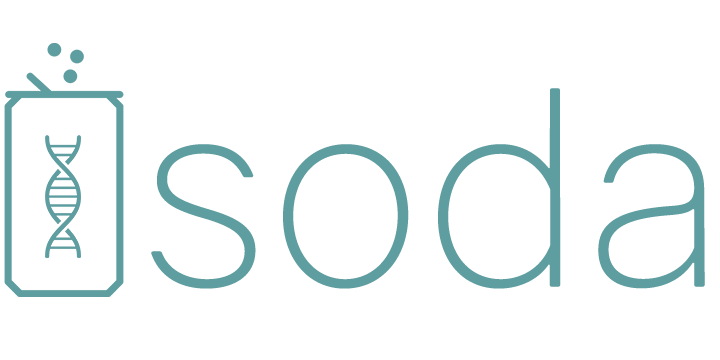 The source code for this example can be found on GitHub

VIBES-SODA is a relatively complicated interface for visualizing the results of analysis with our VIBES pipeline (not yet publicly available). VIBES produces annotations of full or partial integrations of phage sequence detected in bacterial genomes.

Once a genome has been selected from the search bar, several figures will begin to render. At the top of the visualization, you will find a chart that represents a linearized version of the selected bacterial genome. The top row of the linear chart displays annotations of phage integrations to the bacterial genome as identified by VIBES, and the bottom row displays gene annotations (acquired from an externally-sourced GTF file). The linear chart can be zoomed with ctrl+scroll and panned by clicking and dragging. At the top zoom level, the gene annotations are aggregated into groups based off of proximity in the chromosome. As the zoom level increases, the gene annotations are continuously re-rendered as more horizontal screen real estate enables finer-grained display.

Finally, at the bottom of the visualization is a simple table that describes the gene annotations across the active phage genome. Clicking on one annotation (colored bar) in the occurrences plot will cause the corresponding entry to be highlighted in the table.

To use the visualization, input the name of a bacterial genome in the search bar (hint: start typing "pseudomonas" and select the desired genome from the dropdown box).